Ginnie and Pappy Mosses' vision of a special place in the Sandhills took shape in 1974 when the Walthour-Moss Foundation was formed as charitable trust. At a time in life when many people would have been thinking of retirement, Ginnie and Pappy created the "vessel" into which they and the community would place over 4000 acres in the next 30 years. Pappy Moss died in 1976. Sadly, he did not live to see his dream of the "Foundation" become a physical reality. But his legacy lived on.

In 1978, with a bequest from Pappy's estate of 1739 acres, the Foundation which we know today truly began. This was the first of many gifts from the Mosses.

In 2003 - nearly 30 years after her first gift - Mrs. Moss continued her ongoing philanthropy to the Foundation, giving an additional 51 acres behind Mile-Away Farm. Today the Main Foundation stands at over 2,550 acres - created almost entirely by gifts of land from Ginnie and Pappy Moss.

In 1985 the Foundation - with substantial support from the community - purchased 315 acres from Maxwell Forrest north of Furr Road. This was the first acquisition of land outside the main Foundation and the first acquisition which was not a gift from the Mosses. This purchase was also the beginning of what has become known as the Foundation North Country. In 1993 the Foundation undertook a campaign to raise approximately $550,000 for the purchase of 209 acres north of Young's Road from Eldridge Johnson. Mr. Johnson generously offered the land (which was in two parcels) to the Foundation through a gift/sale arrangement at the very reasonable cost of $2600 per acre. The campaign was successful and the Johnson land was acquired, bringing the number of North Country acres to 524 and the total number of acres of The Walthour-Moss Foundation to 2980. In 1999, Mr. and Mrs. Richard Webb made a generous donation of 50 acres adjacent to the Johnson tracts. In 2000, the Walthour-Moss Foundation Board took the bold step of purchasing 417 acres in the North Country from the estate of Raymond Firestone for $3,110,000. The land, which was in two large parcels, was purchased at an average cost of $7,500 per acre.

The Land Preservation Campaign Phase I was undertaken and the community responded with extraordinary generosity. The debt was retired a year ahead of schedule and an effort began to replenish the "Land Fund" for future acquisitions. By the year 2000, the gift by the Webbs and the acquisition of the Firestone tracts brought the total North Country acreage to 991 and the total Foundation to 3,447 acres. In 2004, the Walthour-Moss Foundation was fortunate to be able to acquire 216 acres of wonderful land in the North Country from the Paul Burns family and an additional 34 acres adjacent to the Burns tract from the Gregson/Johnson families. The Land Preservation Campaign Phase II began the same year to raise $3,130,000 for those two purchases and was completed in 2013. In the spring of 2005, the North Carolina Department of Transportation transferred 180 acres of environmentally-sensitive land north of Aiken Road to the care of The Walthour-Moss Foundation. In transferring this land to the Foundation's care, the NC DOT found the Foundation to be "good stewards of the environment and the appropriate entity to care for this special piece of property."

In January 2006 Virginia Walthour-Moss passed away peacefully at home on her beloved Mile Away Farm - so named by Pappy and Ginnie when they moved there in 1937 because "it was a mile away from the train station in Southern Pines." She was 96.

As the community came together to celebrate her remarkable life, the true dimensions of Mrs. Moss's vision and her belief in the future were revealed yet again.

The Walthour-Moss Foundation was advised that Mrs. Moss had bequeathed 114 acres of additional land in the heart of the North Country to the Foundation. This magnificent tract included Sweetheart Lake and joined together three North Country parcels purchased between 1993 and 2000. Her wonderful gift effectively completes the "North Country circle" and brings the total gifts of land by Ginnie and Pappy Moss to over 2,500 acres and the Foundation to almost 4,100 total acres. 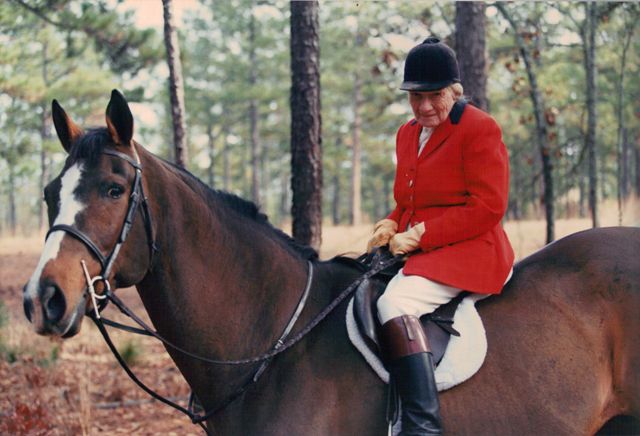 The Foundation Office hours are Monday through Friday 9am-5pm